How to Do More with Less, What to Invest in, and What to Save On

My introduction to fashion was a common one. Around age 10 (what were my parents thinking?), I spent my summers sitting on the floor of my living room watching a blond, curly-haired goddess by the name of Carrie Bradshaw glide through the New York City streets. Everything about her style in Sex & the City captivated me. From the shoes, to the colors, the way she effortlessly shifted between comfort and functionality to sophistication and glamor. Even more captivating? Her version of an artist’s palette: her wardrobe. The whirlwind of textures and colors that she somehow pieced together and from which she made her iconic looks.

As I grew into my own style, I began wondering how she did it. All those diverse patterns and loud statement pieces that never made a second appearance, all while affording her beautiful Manhattan apartment? Shopping weekly isn’t in everyone’s budget, nor is it necessarily in our mutual best interest. Fashion, recently named the world’s second most polluting industry, is full of trends that seem to go out of style once we get out of the store in which we just spent this month’s rent money.

So how do we avoid building a fast-fashion graveyard in our overflowing drawers and closets?

I recently moved into my own apartment, and nothing teaches the value of square footage quite like sharing a two-bedroom with four people. I’ve never been more thankful for the introduction of the capsule wardrobe into my lifestyle. The capsule wardrobe was originally developed by Susie Faux, who encourages consumers to cultivate wardrobes that include between 12-30 items – and that’s it. While this might not be for everyone, it’s caught on heavily in recent fashion with the transition from bohemia to modern minimalism that’s taken place over the past 2 or 3 years. A mere Pinterest search of the phrase will yield thousands of diagrams, lists and outfit ideas that follow this lifestyle choice.

The wardrobe basically boils down to two steps: setting up you color palette, and choosing your basics.

Setting up your color palette entails choosing pieces with a simple color story:

– A Base color (Navy or Black)

This is integral to success. The most important part of a capsule wardrobe is that all the items can be mixed, matched, and worn together.

Next comes the basics:

Total: 28 items. You can mix these numbers up a a bit, but that’s pretty standard.

It hurts to think about at first, but in application, it makes sense. How many times have you rifled through your t-shirt drawer to find that one top you wear twice a week, and brush past all the other tops you swear you’re going to wear again soon only to donate them a few months later? It sucks, seeing all the money you spent go to waste. These were the driving thoughts that pushed me to give it a try. And I LOVE it. At first I looked at what I had left and wondered how I’d ever dress myself with so little to choose from, but now it’s second nature – and laundry is a breeze, too. It’s even changed the way I shop: what I splurge on, what I save on, and what I avoid like no other. Here’s a breakdown of what I put in those categories:

Leather goods: Whether it’s a good belt, pair of booties or a purse, I make sure that I pick items that I cannot see myself going a day without wearing. I also make sure that they aren’t too trendy. For example, choosing a belt with one statement buckle instead of two. That way I’ll be glad to pass it down to my daughter in 20 years rather than trying to sell it to a second hand store that is flooded with them in a couple months. 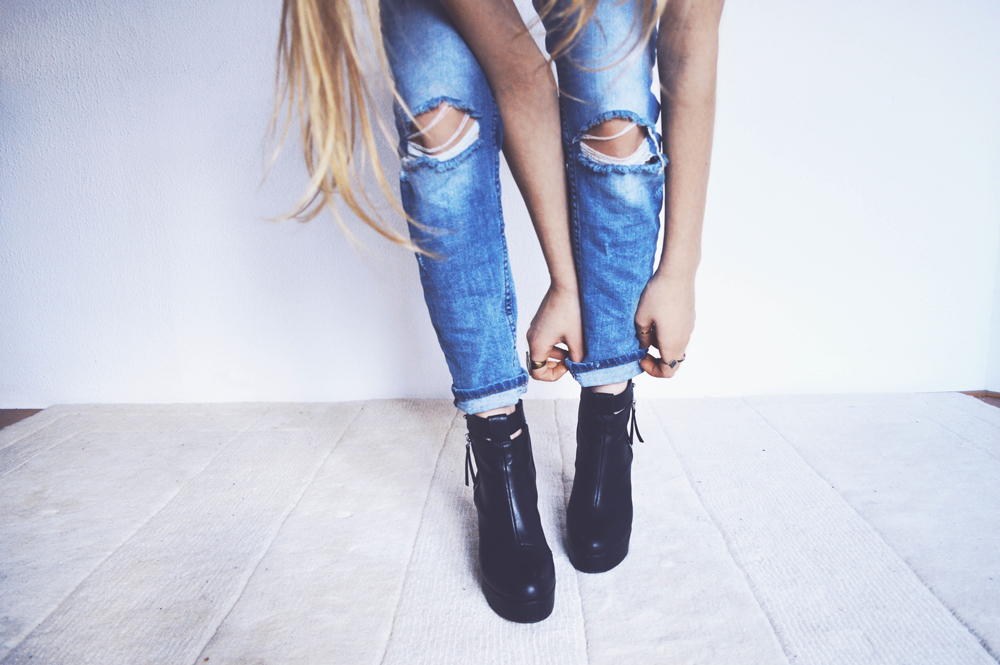 Denim: A staple in any wardrobe, denim should never be skimped on. I’m a long-time lover of Levi’s, so I’ll buy them brand new or thrifted, but the fact remains that quality should not be sacrificed in the name of trendiness. Rather than buying a pair of “distressed” so-called “jeans” from Forever 21, make a day of it and grab a friend to dig through the piles of $10.00 pairs at the Long Beach Flea Market, who will come over and distress them with you over some Sangria. (P.S. I linked a tutorial for distressing…and sangria)

Flannels, Sweaters & Cardigans: Odds are the same J. Crew sweater you’re debating throwing down $100.00 for has a grandmother at a goodwill near you for around $5.00. Same with the flannel you almost bought from Urban that has a little bleach on the end and slits up the side.

Anything temporary. Think about it, when was the last time you wore that plastic choker? It’s important to keep your eye out for pieces of fast-fashion that are just that: fast. In one day and out the other.

It can be intimidating to think of giving up all these pieces that you think you’ll wear again, but it doesn’t have to be done immediately. Try boxing up the stuff you think you might wear again but haven’t in a while and see if you miss them in three months. If you reach for the box, keep that item. If you don’t, send the box to ThredUp and see what you can get for it. Your closet and your wallet with thank you for it. By simplifying your closet, you simplify your life, and it feels so, so good.

So, have you, or would you ever give this capsule wardrobe Strategy a try?

12 Outfit Ideas: What our Favorite SoCal Bloggers Wore This Week

Under $100 Luxe Looks for Less